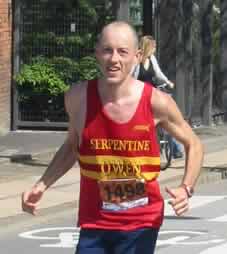 In 1998 I made an ambitious New Year’s Resolution to run a marathon in under three hours. I spent six years trying. In that period, I have learned a lot about what does not work; and even wrote a book about running on the basis of my experience. In 2004 I finally reached my goal, running 2:53 in the Copenhagen marathon. It was a marathon in which everything went right, from my training to the race on the day.

Here is what I learned. Some of this I got from books and articles; but mostly this comes from friends who have much more experience than me, who have been generous enough to share some of what they have learned.

I’ve tried to condense the lessons into seven habits.

1. Train at a variety of different paces, calibrated to your own fitness

Just as your diet should include a variety of different nutrients, your training needs to include a number of different types of workout, each of which improves your running in different ways. None is “better for you” than the others: you need a bit of all of them. You should include long slow runs, lactate threshold runs, VO2 max runs and interval training. In addition, Frank Horwill had the important insight that runners should rehearse their target marathon pace. My Running for Fitness website has details about why you should do each of these workouts and how to figure out the right speed to do them out.

2. Do a big enough mileage

Running is an honest sport: you get out what you put in. You do not want to do endless junk miles (see 1 above) but well judged increases in mileage will repay. For Copenhagen, I peaked at 80 mpw for 2 weeks, about 5-6 weeks before the marathon. This helped me to keep my weight down (see 3). I was able to sustain this higher mileage because my nutrition (see 4 and 5) were better.

Carrying less body weight makes a big difference. I lost about 4kg in the six months before my marathon The calculators on the Running For Fitness website suggest that, other things being equal, without this weight loss my time would have been 3:02 instead of 2:53. This doesn’t mean you have to go on a diet: you can lose a lot of weight over time by running a bit more and cutting back some of your junk habits (in my case, pastries and muffins, and milky coffee drinks). Just two extra digestive biscuits a day adds up to 5kg a year.

As well as contributing to weight loss, where necessary, eating better helps your body to adapt to training, improves your immune system, and gives you more energy. It worked for me to cut out sugar, hydrogenated fats, and highly processed foods; and eating some protein with every meal and snack. Sugar, in particular, has no place in an athlete’s diet: it is a highly addictive and dangerous drug, which the pushers and peddlars are increasingly including in almost all the food you buy.

5. Eat the right stuff after training

After each workout, your body needs to rebuild and adapt. It must learn to store more glycogen, and you must provide the nutrients to rebuild muscle. If you eat the right stuff immediately after your hard workouts, your body will adapt more and better, and your immunity will be less challenged. I found that using the SIS and Hi5 Protein Recovery drinks made a huge difference to being able to run again the next day, and for avoiding illness during periods of high training intensity.

I had a realistic target time, and a clear race plan, which I stuck to. I started running behind the 3 hour pace group, overtaking them only after about 5km. I ran the first half in 1:28; and the second half in 1:25; with most of the increase in speed in the last 10km. I went from 150th place in the first half to 66th place by the end. It is much better, physiologically and psychologically, to start slowly and speed up during the race. According to Jeff Galloway, each 10 seconds a mile you run too fast in the first half will cost you a minute a mile in the second half.

I can only tell you what worked for me; but all this is built on the advice of those with much more experience than me; including members of the Serpentine Running Club, and the many books that have been written about running. I’ve tried to encapsulate that advice in my own book, Running for Fitness. I do not claim that it is original; but now that I have put it into practice myself, I can tell you for certain that it works.

I am so impressed by the clarity and focus of your advice, and your thoughtful discussion of different approaches to training based on both practical experience and research-based. I recommend your book, and your site (especially) to everyone I know who is runs (or wants to start). It has been a huge help to me, a late and slow starter: without you I would never have contemplating running my first race (Serpentine New Year’s Day 10K) Thank you so much.

The points on losing weight and eating better are important ones that are often overlooked. I was an OK (not great, but OK) runner in my teens and twenties. I then stopped for a few year. When I returned, I found I was much slower. Of course, training helped improved my fitness. But losing some weight by cutting out the rubbish (not dieting, just not eating biscuits etc) made a massive difference.

Do you know about Ed Whitlock (can be found with Google)
He is a “Brit” in his 70s living in Toronto (nothing special about that).
However what is very “special” about him is that in his early 70s
he ran the marathon several times in under three hours

Hi – I know about Ed Whitlock and admire him enormously.

hey owen, just stumbled upon this. great stuff. your times are inspirational. i’ve got some work to do and will set about doing it.

About sugar, Ed Whitlock eats ice cream everyday as snack. I don’t think one should totally eliminate sugar from their diet, just in moderation. Sugar, at least, makes you happy and thus reduce stress which is a much more destructive force on your health.

My experience is exercise persistently, moderately, eat whatever that makes you happy in moderation, be it fat, sugar, egg yoke as long as you don’t overeat them. Exercise so you can enjoy the good food. Otherwise, there is no meaning in prolonging a miserable healthy life.

I am a very average runner who tries to run marathons. My one problem is that i am quite heavy. 96kg at 1m 85cm.
the weight doesnt seem to go no matter the amount of running i am doing. I drink smoothies (750ml) made from natural yoghurt, banana, strawberyy, branflakes, orange joiuce and a bit of milk and sometimes a kiwi or peach or pear thrown in once or twoice a day , with rarely a bit carb nmeal. any advice on how to drop the weight as it is an impediemnt to marathon running?

D
You are consuming too many calories. I would knock the smoothies on the head as despite their healthy image, they can cause weight gain. They are high in fruit sugars and too easily absorbed as a liquid. Try and eat whole foods only (that is only eat foods that once swam, ran or grew in the earth), and avoid processed foods. Grill, poach or bake wherever you can and eat foods rich in good oils such as olive oil, flax seeds, salmon, nuts. Avoid sugar where possible and especially avoid foods with the killer combo of fat and sugar (ice cream, doughnuts), but if you follow the swam, ran, earth rule you wouldn’t come across that kind of crap anyway. and drink good amounts of water.
lawrence

I think the admin of this web page is really working hard in support of his web page, as here every information is quality based
data.

[…] to fellow marathon runner Owen Barder, training at different paces is the most important of his 7 effective habits for marathon […]